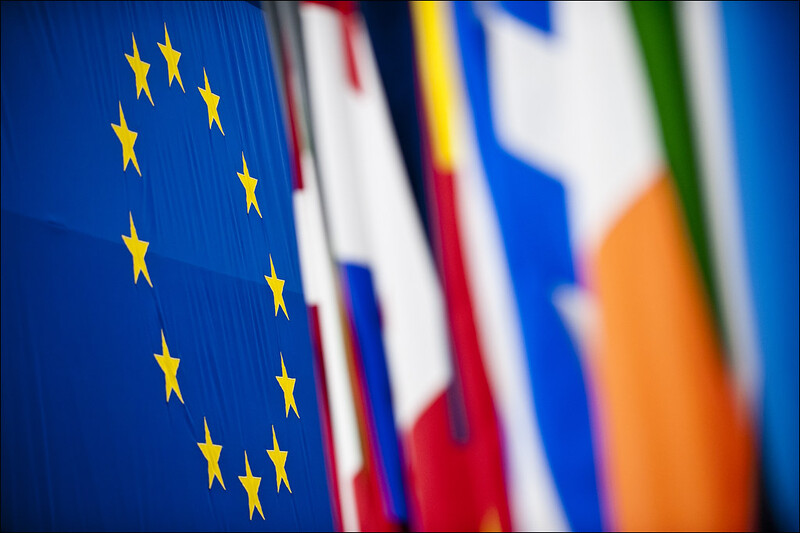 Since the establishment of the European Union (EU), European integration steps have been debated and contested in the public sphere. Roadblocks like the failed Constitution in the early 2000s have led to highly politicized debates over the integration process (e.g., Statham and Trenz 2013). Scholars argue that these debates mainly take place within the national realm, driven by right-wing challenger parties that regard the EU as a threat to national identity and authority (Hooghe and Marks 2009). The following will focus on the politicized public debates, which assess whether issues of European integration are salient, polarized, and reflect a wide range of different speakers (de Wilde 2011; Hutter et al. 2016).

Aside from processes of politicization, European integration has also led to a Europeanization of public spheres, meaning that communication extends beyond nation states and public debates are becoming transnational in nature. In this regard, scholars differentiate between vertical and horizontal Europeanization. The former addresses the communication between national-level and EU-level actors, while the latter captures transnational communication between actors from different nation states (c.f. Benert and Pfetsch 2020; Koopmans and Erbe 2004).

Previous empirical research has neglected a side-by-side systematic analysis of the two phenomena, politicization and Europeanization. From what is known, the relationship seems to be negative; whenever the politicization of public debates is high, the Europeanization in terms of the actors engaged in public debates is rather low. This has to do with the fact that it is mainly national parties that mobilize issues of European integration within the national arena (Hooghe and Marks 2009; Hutter and Grande 2014; Hutter et al. 2016; Zürn 2019). Put differently, Europeanized public debates are widespread, but are considerably less politicized than are national public debates over European integration issues (Börzel and Risse 2009; Koopmans and Statham 2010; Risse 2015).

In my master’s thesis in the program Sociology – European Societies at FU Berlin, I have reconsidered the link between politicization and Europeanization in the context of Europe’s latest crises. On the one hand, the so-called Euro crisis and the Schengen crisis enhanced public conflict among domestic actors. On the other hand, both crises demanded European action, triggering public debates among European political actors. In other words, the debates related to the Euro and Schengen crisis are characterized by ‘two types of conflict that fed into each other – intergovernmental conflicts at the European and inter-party conflicts at the national level’ (Hutter and Kriesi 2019: 997). Thus, I argue that we witness a qualitative shift in the sense that, in times of crisis, public conflict is prone to expand from the domestic to the European level where it causes politicization among European actors, i.e., what I argue is Europeanized politicization.

Empirically, my master’s thesis sheds light on developments in France and Germany. The focus on these two countries is especially relevant as they are considered key drivers of European integration. The analysis of politicization and Europeanization dynamics is based on core sentence analysis (CSA), which uses media articles from two quality newspapers in France and Germany. I conducted an original dataset of the Schengen crisis to complement the existing dataset ‘poldem-debate_eu’ (Grande et al. 2020). The comprehensive dataset covers public debates from the 1970s until 2016, which allows for an assessment of both the short and long-term development of politicization and Europeanization. 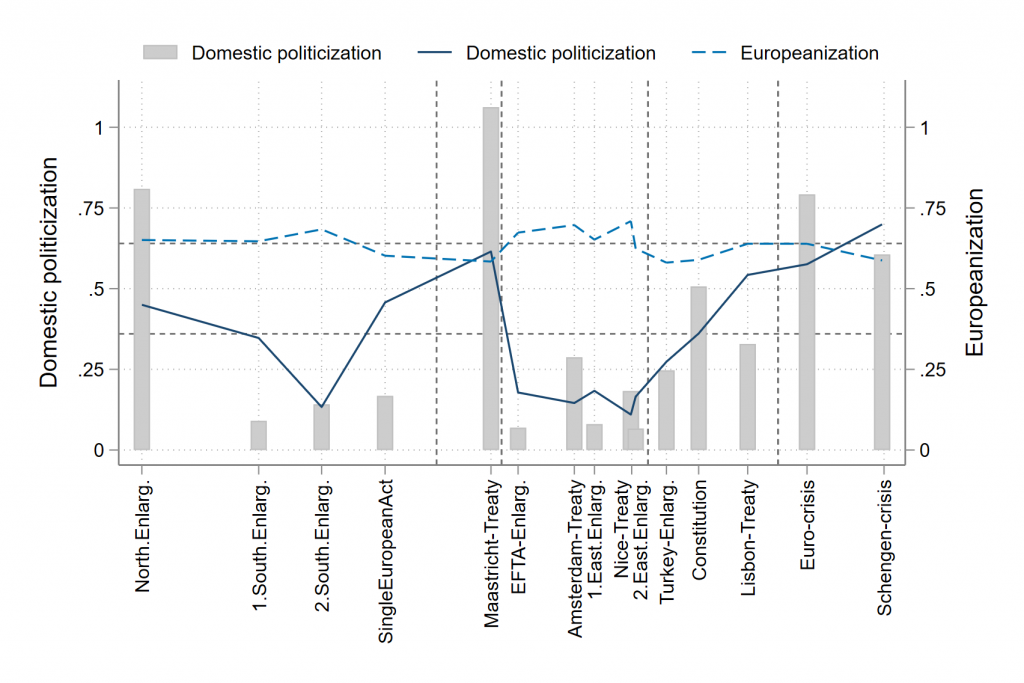 However, as expected, the Euro and Schengen crisis tend to deviate from this general pattern. In particular, public debates, which took place during the Euro crisis are characterized by both high levels of domestic politicization and Europeanization. This speaks to a Europeanized public conflict. Additional analyses on the involvement of political actors in these crises-related debates indeed reveal high levels of vertical and horizontal Europeanization; hence, public debates over the Euro and the Schengen crises have been highly politicized across France and Germany. In a forthcoming book chapter based on my master’s thesis, I elaborate on the country-specific developments in more detail. In a nutshell, the politicization expanded past the national scope and enhanced a Europeanized debate with EU-level and foreign European actors engaging in French and German debates.

Debates around European integration steps are first and foremost politicized at the national level. However, highly politicized events such as the Euro and the Schengen crisis can enhance the Europeanization of the actors participating in such debates. The Euro crisis in particular involved conflict between domestic, foreign European and EU-level actors alike. Overall, the findings show that politicization over European integration is no longer restricted to the national level. This means future European policymaking has to deal with not only domestic politicization, but also faces increasing European-wide political conflict. Thus, we likely witness an ever-stronger contentious turn in EU politics.