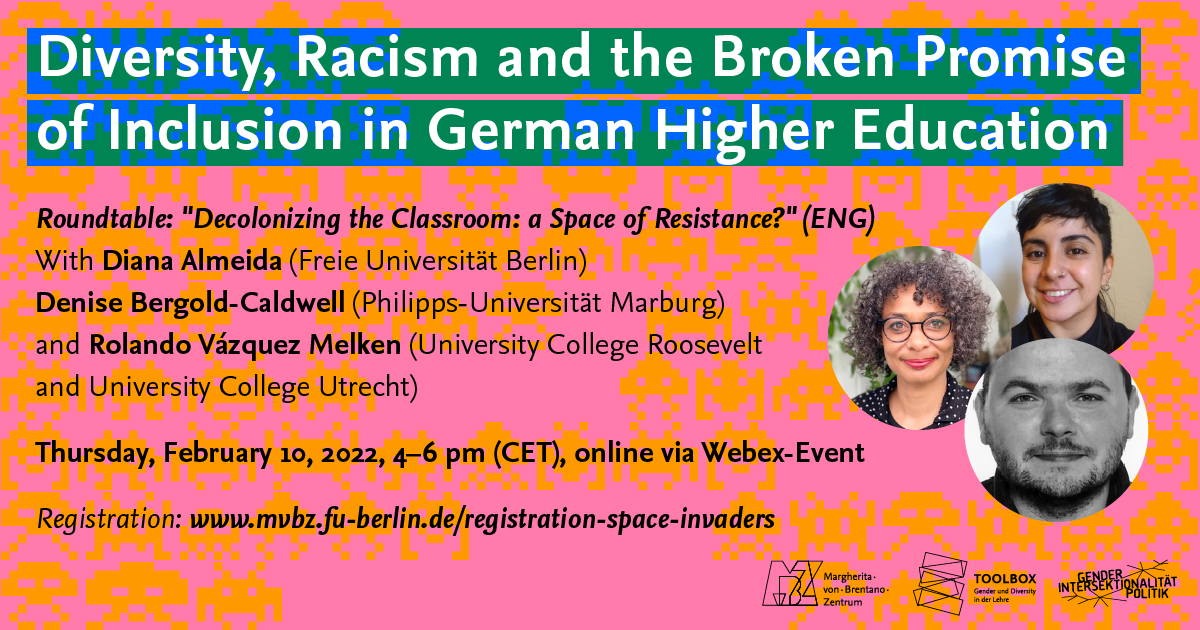 On February 10th, 2022, the Margherita von Brentano Center for Gender Studies, the MA Program Gender, Intersectionality and Politics and the Toolbox Gender and Diversity in Teaching completed their joint event series on „Diversity, Racism and the Broken Promise of Inclusion in German Higher Education“ with an online roundtable discussion.

What is ‘decolonization’ all about and what does it mean within the university context? How is it related to already existing diversity policies? And most importantly: What is its potential for revolutionizing the classroom?

These and other questions were discussed by Diana Almeida,  graduate student in Sociocultural Anthropology  currently enrolled in the Master’s program Gender, Intersectionality and Politics at Freie Universität Berlin and political activist, Denise Bergold-Caldwell, scientific director of the Center for Gender Studies and Feminist Futurology at Philipps-Universität Marburg and former social worker and Rolando Vázquez Melken, sociology professor and decolonial thinker at UC Roosevelt and UC Utrecht as well as co-author of the report „Let’s do Diversity“ of the University of Amsterdam Diversity Commission.

As the Toolbox Gender and Diversity in Teaching  aims at implementing anti-discrimination and sensitivity for gender and diversity in academic teaching, we asked ourselves: What new insights do we take from this discussion? In what way is our understanding of diversity being challenged? And what remains to be done?

In academia, decolonization has long been treated mainly as a theoretical concept, being born out of abstract poststructuralist thinking. In the public mainstream however, colonialism itself is often being perceived as something that has been overcome a long time ago, the debate around decolonization therefore seen as being somehow outdated and if so, only relevant for “affected minorities”.

That these perceptions are not only fundamentally wrong but jeopardize all attempts to move towards a more inclusive and just society has been made clear by all three discussants. Diana Almeida, who sees her role as postcolonial activist on the one and postcolonial scholar on the other side as being immanently interlinked, stated that „decolonization didn’t start with it being conceptionalized but that conceptionalization and knowledge created around it was possible because of several anticolonial struggles and movements.“ For her, claiming that scholars need to choose between pursuing activism and research in academia to preserve objectivity is therefore misled. It is quite the opposite: As decolonial perspectives are deeply rooted in political struggle, roles of being an activist and a scholar cannot be separated.

Yet, to understand the workings of colonial power dynamics as ubiquitous structure that determines the way we live, think and perceive the world – a structure nobody can escape from – it is important to grasp the distinction between ‚decolonialization‘ and ‚decoloniality‘ as introduced by Rolando Vázquez. Whereas decolonization describes the historical political process of liberation from colonial empires, decoloniality addresses the processes of dismantling so-called ‘universal’ abstract ways of thinking and explaining that were born out of colonial circumstances and are still very much alive until this day, revealing the continuation of western hegemony.

All three discussants agreed, that the development of decolonial thinking would be unthinkable without the influence of non-white feminism and its efforts to break with western ideals of abstract universality. For it was the accomplishment of non-white feminist struggles to reveal that power relations are played out and experienced within the body, that lived experiences and one’s own social-historical positioning must therefore not be ignored (as it is the case with abstract concepts of the self) but rather be the point of departure for knowledge production. The fact, that black feminist authors who have developed a great corpus of literature around ideas of embodied experience and how to care and relate to each other are still not part of the academic canon, is another sign of coloniality still in the working, stated Bergold-Caldwell.

When eventually asked about the urgency of the anti-colonial project, Denise Bergold-Caldwell highlighted the real consequences caused by the workings of coloniality on the global scale of exploitation: „We are losing our world, (…) climate change and all the aspects of people dying in (..) several oceans, this is really urgent – it is life threatening.“

Why current diversity programs are not enough and an alliance with decoloniality is urgently needed.

Universities are part of broader society including its power relations and hierarchies. As an institution which primarily functions as gate keeper and door opener for careers, respectively for the access to positions of power and decision making, the university carries a special responsibility as a game changer. When asked to evaluate current diversity policies at universities in this respect, our discussants pointed to the danger of cooptation as well as to possibilities for new alliances.

Denise Bergold-Caldwell warned that diversity often functions as a shining front for universities, as an excuse not to mess with existing power structures where actual change needs to be realized. Diana Almeida also registered a sharp increase of diversity on an institutional level in general but stressed that these programs often rather function as short-term solution to consequences of discrimination without addressing the structural conditions that lead to discrimination in the first place. In decolonial thinking though, she sees a great potential for questioning and transforming the social imaginaries and actual practices at academic institutions. Rolando Vázquez agreed that diversity is sometimes instrumentalized and turned into a tool of power („diversity washing“). However, he pointed out that it is important to acknowledge that at the same time universities‘ diversity policies also have been the result of student movements that will not cease to exist but will bring more radical change in the future.

So, what is the potential transformation decolonization can bring to universities and where does it surpass conventional diversity programs?

Decolonization – and this is stressed by all three scholars – does not stop at the question of representation, of WHO gets to study and teach at the university, but includes WHAT is being taught as well as HOW it is being taught.

„Diversity is not to bring everybody to study Kant and Hegel – that’s not diversity, right?“ comments Rolando Vázquez. Instead, diversity in a sense that embraces the idea of decoloniality, is not only to change the student and teachers‘ demographic in order to match the diverse population in society, but to question the central pillars of western academia – by scrutinizing what type of knowledge is considered as legitimate, how research is conducted and most importantly how students are addressed and confronted with that knowledge in the classroom. Being intuitively linked to anti-colonial struggles, the „decolonial scholar is not to invent concepts but to listen“ (Vázquez), addresses social movements as „political subjects instead of scientific objects“ (Almeida) and asks for the meaning of knowledge rather than using it as capital (for a career etc.). If taken seriously, this „positioned science“ (Vázquez) that takes lived experience as valid starting point for gaining knowledge has also far-reaching implications for pedagogy, for HOW student and teachers meet and interact in the classroom.

The Classroom as Space of Resistance?

Rolando Vázquez sees great potential for the classroom as space where new ways of interacting, learning and relating to each other can be experienced and alternative realities – as starting point for political transition – can be produced. Rejecting the existing logic of education as „machinery of individualization“, the „decolonial classroom has to be a positioned classroom, where students recognize who they are“. By putting emphasis on who we are in relation to the (global) community we are part of, by opening a space for understanding our own commitment, the meaning of knowledge and education then becomes a question of social responsibility rather than of building an individual career.

Denise Bergold-Caldwell partly disagreed. From her experience as former social worker and political activist, it is out on the streets where she sees the biggest potential for social transformation. Decolonial teaching can help to raise awareness and motivate students to become politically active, but the need to go out and become involved in social movements for real change to take place should not be underestimated.

As migrant and racialized student, who experiences her roles as researcher and political activist as inseparably linked to each other, Diana Almeida already lives this kind of engaged science many decolonial thinkers are talking about. For her, it is therefore neither within nor outside of the classroom where resistance can be formed but only through its close linkage. Being part of those two worlds, her focus therefore lies on translation: Translating theoretical concepts of decolonial scholars into a language political activist can work with while at the same time bringing experiences of political activism back into the classroom.

Where do we go from here?

To sum it up, the decolonized classroom is a space where it does not only matter who is participating, but also who’s perspectives are being heard and how experiences of students can be valued as central part of gaining knowledge. By focusing not only on anti-discrimination but just as much on the diversification of teaching content, methods and didactics, the Toolbox already reflects these claims. Many other questions however, remain open:

How can the separation between scholarship and political activism be overcome when individual competition and scientific output remain the main driving forces of academic careers? In what way could gender- and diversity-sensitive didactics be used to connect students experiences and commitments to the meaning of knowledge? And how can teachers be trained to translate academic language into tools for social change, and thus enable people to participate on the basis of social responsibility?

As Diana Almeida stated: „By understanding theories of decolonialization, [we] are not exempt from colonial power dynamics.“ Let us keep this in mind and start turning knowledge into practice.

Vázquez, Rolando (2020): Vistas of Modernity. Decolonial Aesthesis and the End of the Contemporary. Amsterdam: Mondriaan Fund